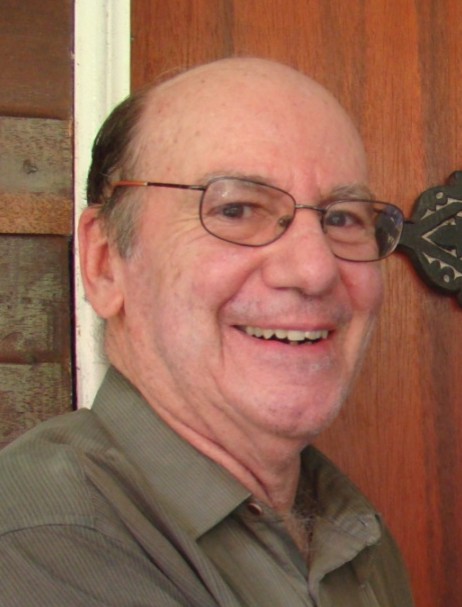 Mexican architect, environmentalist, and ecotourism and cultural tourism expert. He graduated as an architect with highest honors at the Instituto Tecnologico y de Estudios Superiores de Monterrey in Mexico and carried out graduate studies in the fields of regional planning, architectural design and systems building in Paris, Rotterdam, London and Mexico City.

He is currently the Director General of the Program of International Consultancy on Ecotourism (PICE) and Special Advisor on Ecotourism to IUCN (The International Union for Conservation of Nature) and the United Nations World Tourism Organization (UNWTO). Previously he was the Protected Areas Program Coordinator of IUCN, with headquarters in Gland, Switzerland (1991-92).  In this position, he was IUCN coordinator of the IVth World Parks Congress, carried out in Caracas, Venezuela (1992), with the attendance of 1,800 participants from over 130 countries.  From  1982-84 he was Director General of Standards and Technology of SEDUE, the Mexican Ministry of Urban Development and Ecology, and between 1977 and 1982 he was Technical Director of FOVI, the low-cost housing fund of Mexico's Central Bank.  In 1981 he was founding president of PRONATURA, currently Mexico's most influential conservation NGO, and in 1984 he founded ECOTOURS, the first ecotourism operator to be established in Mexico, and the first agency in the world with that name.

Mr. Ceballos-Lascuráin is an expert in environmentally-friendly architectural design,  planning and development of sustainable tourism, ecotourism, park management, and housing, with world-wide experience in this field.  He has carried out consultancy and research work in 80 countries, including physical planning and low-impact architectural projects for tourism facilities, collaborating with governments, NGOs and private firms in those countries, as well as international institutions such as UNDP, UNEP, FAO, World Bank, OAS, World Tourism Organization, IUCN, WWF, US-AID, IDB, NAFTA, Conservation International, National Geographic Society, German Technical Cooperation Agency, etc. He has spoken in conferences and symposia in over 35 countries.

He has developed the National Ecotourism Strategies for Mexico, Ecuador, Malaysia, Uruguay, Dominica, Colombia and Yemen.

He is particularly interested in the interrelationship between ecology, environmentally-responsible architecture,  tourism, regional development, local communities, and conservation,  subjects on which he is the author or co-author of over 140 books, reports and articles.  His 315-page book on "Tourism, Ecotourism, and Protected Areas" was published in 1996 by IUCN. He also wrote "Ecoturismo: Naturaleza y Desarrollo Sostenible", published in 1998 in Mexico City, and is co-author of "International Ecolodge Guidelines", published by The International Ecotourism Society in 2002.

In 1983, he coined the term "ecotourism" and its preliminary definition. His modified version of this definition was officially adopted by IUCN in 1996.

In 2004 he obtained the Colibri Lifetime Achievement Ecotourism Award, granted by planeta.com and Canyon Travel.

In 2008 he was granted the Lifetime Achievement Award by IRHA (International Restaurant and Hotel Awards) for his dedication to sustainable tourism and ecotourism through smart design (Beverly Hills, California).  (www.IRHAwards.com).

In 2015 he was awarded the National Prize of Tourism Education by AMESTUR, Mexico. 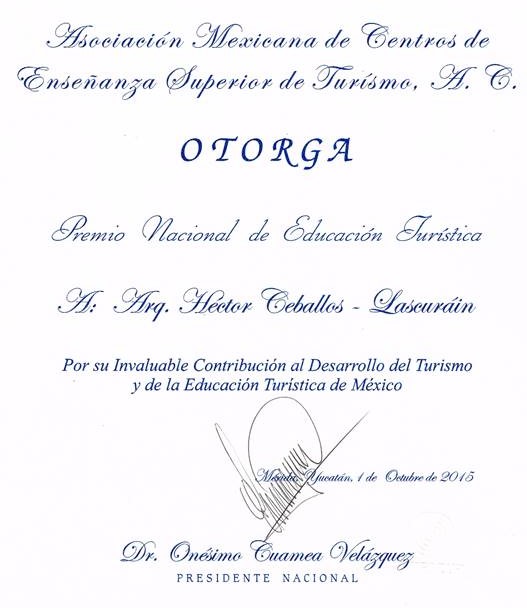 DIPLOMA OF NATIONAL PRIZE OF TOURISM EDUCATION BY AMESTUR, MEXICO (2015)

At present, there are over 45,000 references to his work in the Internet (searching for “Ceballos- Lascurain” in www. google.com)

He is also keenly interested in ornithology and bird watching, and has identified to date 4,371 bird species in their natural habitat around the world, which places him as the highest ranked Mexican birder in the world, according to ABA (American Birding Association). He also holds the all-time birding record of having registered 4,241 bird species around the world during a period of 42 straight years (longest streak averaging over 100 lifers per year) between July 1969 and July 2011.